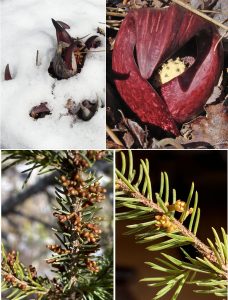 I thought the answer was skunk cabbage, Symplocarpus foetidus, which I thought is found naturally only in SW Nova Scotia but, according to Nova Scotia Plants, also occurs in Cumberland Co.

The skunk cabbage pics at right were taken during  a NS Wild Flora Society outing in 2009, led by our President, Charlie Cron, who travels to SW Nova Scotia most springs to check it out.

I made a post about it on Facebook and soon got a message from Bob Guscott, retired forest pest specialist with DNR (now L&F), one of his obsessions being the  ecology of mistletoe in NS.

Yesterday while walking in the neighborhood, I found most of the shoots on black spruce had not opened up yet. But, further down the trail in a sunnier location a few of these tiny yellow beauties had opened up.”

So I am guessing it’s a tie between the two.  Eastern Dwarf Mistletoe is much more widely distributed than skunk cabbage, so perhaps it should be #1.

The hooded spathe stands 10cm tall erupting through the snow in some years. Its disagreeable self is long-persistent. Leaves emerge about six weeks after flowering, and are very large, sometimes 1m in length. The venation is prominent.

Found in Digby and Yarmouth Co. and Cumberland Co. Scattered in the southwest though abundant where found. Ranges from NS to MB, south to TN, IA and NC; Asia.

Skunk cabbage is “thermogenic”, uncoupling its respiration from ATP (chemical)  production to generate heat and melt holes in the snow and exposing the spadix (flower clusters). The heat also helps in  sending out foul smelling volatiles to attract pollinators such as bluebottle fly – the adults feed on nectar, the females lay eggs on rotting flesh and so are attracted by the foul smells of skink cabbage.

A tiny shrub that parasitizes spruce trees, it buries its stems within the cambium of the host tree. Plants are brown or
purple, the leaves reduced to scales. Flowers are borne on curved pedicels, each producing a single berry.

Parasitic on the branches of spruce trees. Especially common in coastal black spruce forests. Along the Atlantic from Yarmouth to Cape Breton; common. Scattered inland and north along the Minas Basin to the Gulf of St. Lawrence.

Ranges from NF to SK, south to PA and MN.

Dwarf Eastern Mistletoe causes “Witches’ Broom” which may be more familiar than the flowers to most Nova Scotians. Bob Guscott comments further:  ” It also occurs commonly in coastal old-field white spruce forests especially in Northern Nova Scotia. The other exciting aspect of the mistletoe life cycle is the mature seeds that swell in the fall and then explode under pressure and send tiny and sticky missile-like seeds through out the forest canopy. ”

This entry was posted in Flora, natural history. Bookmark the permalink.