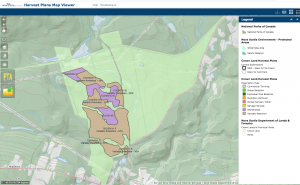 The Nova Scotia Wild Flora Society (NSWFS) requests adjoining blocks CU200212A, CU200211A, CU200212B, CU200211C, CU200212C, CU200211F, CU2020211D and CU200211E in Cumberland County east of Oxford (96.64 ha total) be immediately removed from the harvest schedule because of presence of native ash species. These stands are either categorized for shelterwood or for 30% variable retention on the HPMV. Note that since 2017, due to the widespread emerald ash borer infestation, all native american ash are on the International Union for Conservation of Nature (IUCN) red (critically endangered) list. NSWFS is requesting a ban on logging equipment that might carry and spread this insect into our disappearing forests.

We visited the blocks several times and also observed an unusually wide array of wildlife evidence including footprints, woodpecker holes, deer rubbing, and lots of large deadfall and snags and possible bear dens. The forest itself is mature multi-aged multi-species with many trees definitely over over a century old. The habitat is hilly and Karsty with many little wet depressions and streams. Here we often find scattered small black and white ash. Note that the adjoining crown forest to the North East hosts some large healthy Old Growth black ash so, this area should also be protected. The planned harvest blocks themselves, appear to be mostly regrowth after a century old fire as there are scattered old jack pine, lots of white pine, black and red spruce evident. There are also large poplar and paper birch and sugar and red maples present, especially on higher ground. Scattered hemlock; mostly on slopes with south west exposure and the odd red pine were also observed. Comments close on this block Feb 27, 2021.