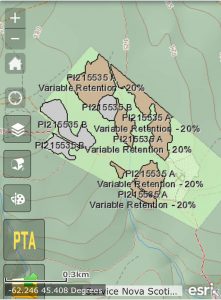 From HPMV.
Click on image for larger version.
View This Map for broader location

The Nova Scotia Wild Flora Society (NSWFS) requests that the Harvest plans for blocks PI215535 A and B slated for 20% variable retention and commercial thinning, respectively be revisited. These blocks, which are primarily conifer, immediately surround a large multi-aged healthy native ash dominated forested wetland. Ash saplings and trees were also observed growing in the conifer blocks slated for harvest. It is recommended that any cutting done in here be done with great care so as not to harm the unique cascading ecology of the enclosed native ash forest. Native ash is redlisted as critically endangered by the IUCN. Chaga was also observed growing nearby on a large yellow birch just north east of the blocks. The NSWFS thanks Nova Scotia Lands and Forest for their consideration and urges them to ask industry to avoid harvesting areas immediately proximate to native ash stands.
Comments close on this property March 20, 2021.
Sincerely,
Mary Macaulay
Secretary, NSWFS