On July 23, 2022, I participated in a portion of a Sierra Club walk through woodlands and to the Eisner Cover wetland. I entered the woodland from the small parking lot by Hope Avenue and joined the group as they entered that area and proceeded down to the wetland.

Rhodora and Cinnamon Fern in the Upland Forest

On my way back to Hope Avenue from the wetland, I walked up an informal  trail and documented occurrence of two common wetland species – Rhodora and Cinnamon Fern –  beginning at about 40 meters from the open wetland and well above the very wet area of a lot of sphagnum moss etc.

iNaturalist Map showing locations of observations if Rhodora and Cinnamon Fern on July 23, 2022.  Click on image for larger version

The first observation proceeding from the wetlands upwards towards Hope Ave.  is  iNaturalist 127818807 – Rhodora; altitude approx. 63 m or 3 m above the wetland which lies at approx. 60 meters above mean sea level. 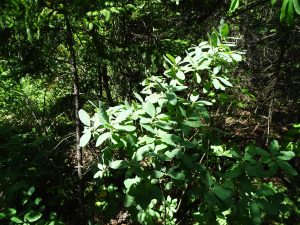 The final observation in the series is iNaturalist 127866748 – Rhodora is at approx. 118 m from the wetland, and almost at the edge of the woodland overlooking Hope Avenue, estimated elevation 67 m, i.e. 7 meters above the wetland. There were a total of 6 individual plants or clumps of Rhodora over this interval, and 4  of Cinnamon Fern.

As I proceeded upward towards Hope Avenue there was increasing abundance of Bracken Fern and  Sheep Laurel (Kalmia angustifolia); I documented just a couple of examples of those species on iNaturalist. The leaves of Rhodora and Sheep Laurel are superficially similar, but are quite distinctive in detail; by my assessment,  the iNaturalist ID was correct for all specimens. Only one Rhodora plant had developing fruit; this plant was the one highest up on the trail, and the most exposed to sunlight. 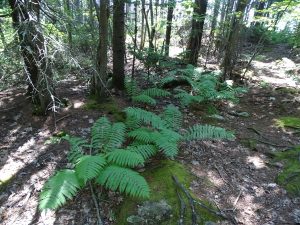 Most of the spruce in this area appears to be Black Spruce.  White Pine is most abundant towards the wetland. Red Maple is common throughout. Large shrubs include  Serviceberry, Wild Raisin, Mountain Holly;  occasional Witch-hazel & Hobblebush.

How Old are the Black Spruce?

I  estimated the age of a  stump of black spruce sawed at about 3ft height as 60-63 years; the stump was 6.6″ (17 cm) in diameter.  The largest Black Spruce nearby was 16-17″ estimated dbh, so possibly 100 yrs or more in age.  See iNaturalist127909671 for details. There was a lot of selective harvesting of forests in the Halifax area up to about the 1970s or 1980s.  I observed many old stumps, some over 2 ft in diameter. The forest is easy to walk through, i.e. well past the early successional “pole” or “stem exclusion” stage. It is an Old Forest. 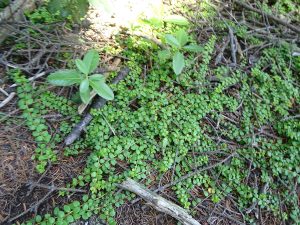 Creeping Snowberry in the Upland Forest

Environmental Setting: SP5 is associated with fresh to moist, nutrient poor soils. Thick, ericaceous duff layers are common which limit regeneration by seed unless disturbance creates more exposed micro-sites. Without disturbance, black spruce regeneration is usually by vegetative layering. This VT can be found throughout Nova Scotia on a variety of soils with low nutrient status. This VT is widespread and common across the Maritime Provinces.

I dug a hole in the forest floor at one position. There were 2-3 cm of fresh organic matter over thick “duff” down to a boulder at approximately 30 cm depth;  the lower 15 cm or so were very wet. See Chojnacky et al., 2009 for a definition of duff, and comments on its importance in carbon storage; 30 cm of duff is a lot. 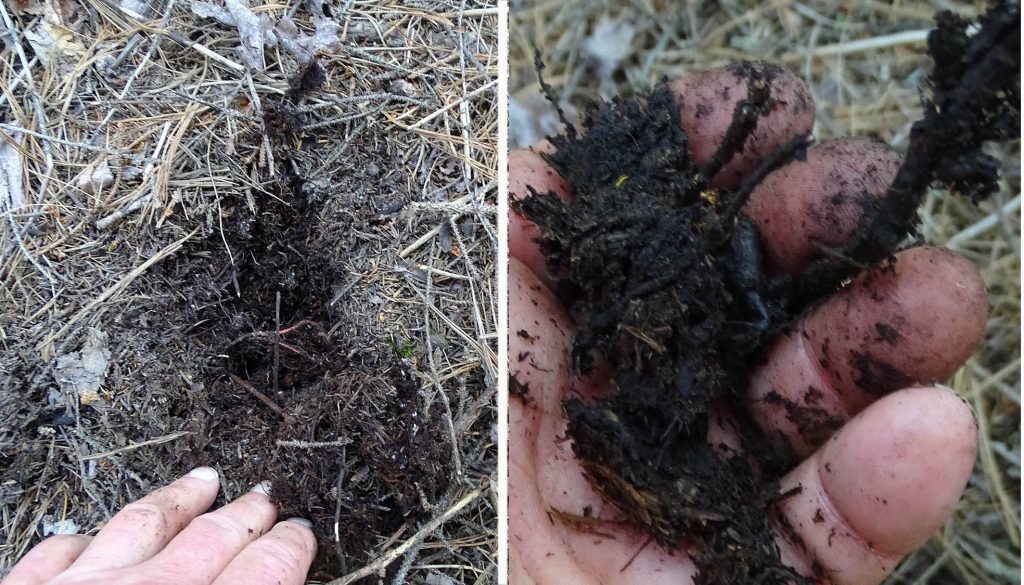 Thus it can be expected that clearing of the forest will result in substantial loss of carbon, contributing to global warming; and in much more erratic flows of water into the wetland, likely resulting in excessive  flooding at times and  severe drought at other times.

At least part of the the wetland is classified as a fen and as such is highly  dependent on the integrity of the surrounding, mostly  forested uplands. Erratic water flows combined with greatly increased nutrient inputs from an urbanized environment could be sufficient to trigger a change in the wetland from a carbon-storing system, to a carbon-emitting system. potentially even to  a “carbon bomb“.

These factors  and possibilities have apparently not been considered in approving the area for development.

My observations were limited and informal but surely are sufficient to indicate that a proper Environmental Assessment is  required  before proceeding with any development of the forested upland in the area of the Eisner Wetland.

I will refine this description if and as I am able to make more visits to the area. 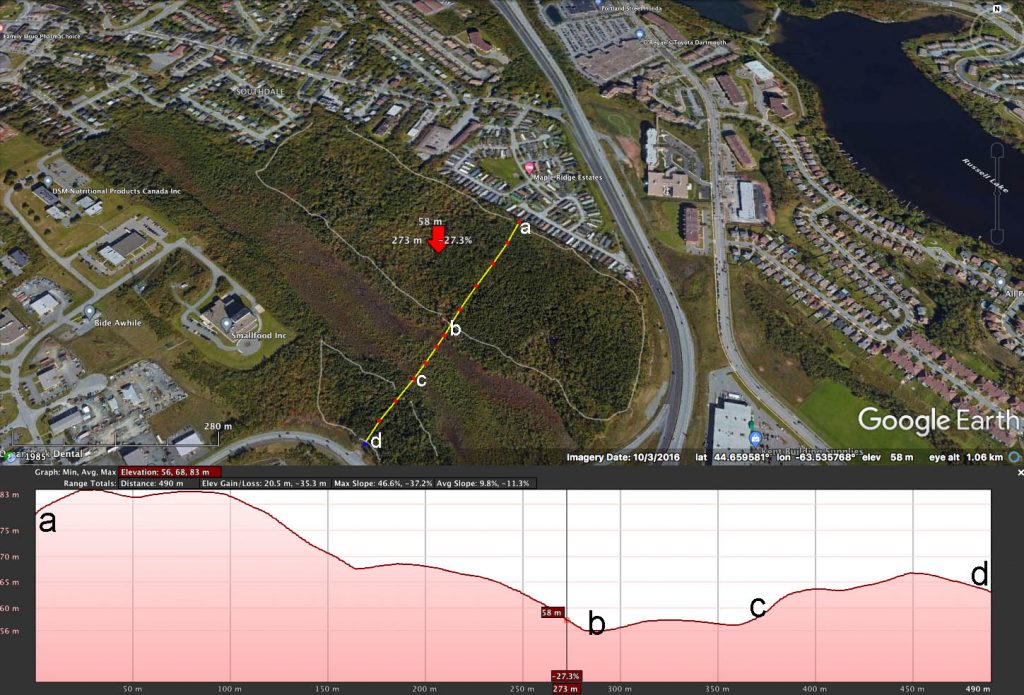 Google Earth image of Eisner’s Wetland & Environs, with elevation profile. Approximate areas proposed for development (based on diagrams in HRM document) are enclosed (NE side of wetland) or partially enclosed (southwest side) by white path. Panel at bottom is an elevation profile. Most of the upland in this watershed is forested. How can we possibly expect that the wetland (mostly fen, and therefore directly linked to the uplands) will NOT  be seriously degraded following deforestation and development of the uplands?