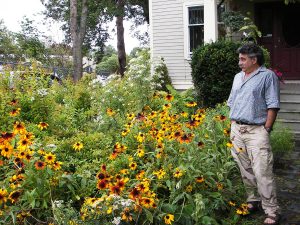 View Video of Bill in his garden
by Chris Benjamin, 2008.

Professor and avid environmental ecologist Bill Freedman maintained a large assemblage of native plants in the relatively small spaces around his house on South Street, across from Dalhousie University.

After Bill’s premature passing in 2015, his spouse George-Anne sought for a means to maintain the collection. A team led by Allison Schmidt of the Biology Dept at Dalhousie had been developing a plan to construct native plant habitats and introduce native plant assemblages in the LSC quad (the area enclosed by Biology, Psychology and Oceanography buildings) and readily volunteered to take them. 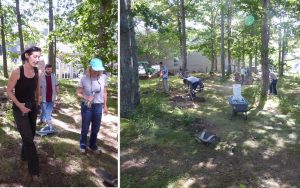 As it turned out, the quad area will not be available for several years because of renovations, and Allison found another site to host the collection – in the wooded area (mostly red oaks) between the Psychology Building and Sheriff Hall. 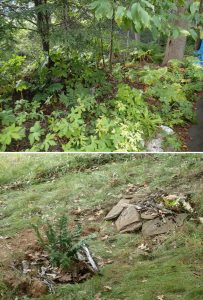 Above: plants in shady, alkaline environment in Bill’s garden
Below: Microsites under oaks on sloping ground; sites are designed to capture water, soil conditions made alkaline (with added calcium) or acidic depending on the species

Don’t expect a neat, orderly ‘botanical garden’ (as Bill’s wasn’t). It’s a challenging site, on shallow, rapidly draining soil. But we think we have designed effective “microsites” to capture and store water for the shade species/early spring ephemerals (photo at right) under the trees, and we placed the more drought-tolerant, sun-loving species where Bill had placed them (as in the photo at the top of the page) – in a larger “macrosite” in the sun.

With a little weeding in the plots and at their perimeters until Bill’s plants are well established, natural selection will do most of the maintenance. About 15% of plants were lost over the first winter; some of those may be replaced and others added in the future. Growing native plants away from their normal habitats is a learning process! 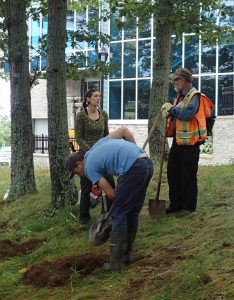 Outside of the plots, there is an interesting assemblage of native and exotic (weedy, ruderal) species which colonized the area naturally. There are also several native and exotic species that we guess must have been deliberately introduced in years gone by.

So it’s a good place for Dal students and visitors to learn and practice plant ID skills, also to find out when various species are likely to be in bloom in their natural habitats in NS.

We expect that the Nova Scotia Wild Flora Society will be regular visitors, and ongoing volunteers in Allison’s/Dal’s efforts to maintain and further develop the site. 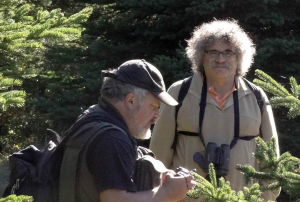 Mike MacDonald and Bill in the field

Allison enticed many Dal students and other volunteers to assist with site preparation and moving the plants. Also involved were two of Bills former graduate students, Richard LaPaix and Mike Crowell who ‘know their plants’ as well as anyone in NS. And contributing to Bill’s garden was Mike MacDonald, a “nature nut” who worked with Bill on many projects, and passed away prematurely only a few months after Bill. Mike also had a large collection of native species in a small area by his home in Spryfield, and Bill and Mike each contributed to each other’s garden. Much of Mike’s garden went to Acadia.