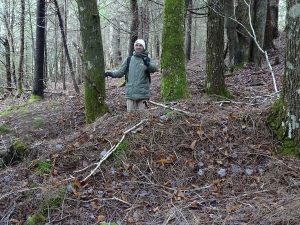 Context
A draft “Old-Growth Forest Policy for Nova Scotia” was released by the Nova Scotia government on Nov 9, 2021 with a general invitation to Nova Scotians to give their feedback on proposed updates to the policy by Dec 8, 2021.

An Old Growth stand is any forest stand (polygon) or circumscribed area of 0.5 ha and greater with 20% or more of the basal area greater than or equal to 100 years of age.

Comment 2: The goal of including a minimum of 8% of Crown land in each ecodistrict in the Old Forest Policy Layer is arbitrary and insufficient to properly conserve Old Growth Forests and associated species dependent on old forests.

Recommendation 2: The goal of the OGFP should be to conserve 25% of our forests by area as Old Growth, half on Crown lands and half on private lands.

Comment 3: Given the global and local climate and biodiversity crises, we should move as quickly as possible towards this goal of conserving 25% of our forests by area as Old Growth.

Recommendation 3. Implement a Precautionary Old Forest Protection Plan that requires a minimum 25% of forest to be in the oldest development stages (Late Mature and Multi-aged/old forest) in each ecodistrict, with at least half of that area on Crown lands. If the total for an Ecodistrict that is currently in the oldest development stages is less than 25%, then there should be no logging on those Crown lands.

These are our major recommendations that, if implemented, would build on the laudable features of our current Old Forest Policy, notably its simplicity and functionality, while addressing some of its deficiencies, and specifically address the need to take action now to address the climate and biodiversity crises. They are also consistent with the perspectives of Bill Lahey expressed in the Independent Review of Forrest Practices in Nova Scotia:

We are also supportive of a broader range of comments cited in feedback on the Old Forest Policy received by Nature Nova Scotia:

Key feedback included:
– Agreeance that, at the policy states, protected areas are not enough to adequately safeguard old forests, requiring greater measures on other crown lands
– Concern that the conservation of biodiversity is not a goal in the current draft, as stated in the 2012 policy
– Concern over the short consultation period and lack of opportunities for Nova Scotians to get involved
– Concern that the old growth forest scoring protocol, the pre-treatment assessment (PTA) protocol, and the monitoring protocol, are not included with the policy, limiting public consultation
– Concern over the raising of the minimum tree age for some species to 140, and that the minimum forest size must be 1 ha
– Concern that working lands cannot be considered old forests, despite tree age, simply because they are working forests
– Concern over the fact that the Minister can still remove old growth forest areas from the policy’s protection if a development project is proposed
– Recommendation to prohibit the logging of old forests on all Crown lands
– Recommendation to have a third-party oversee the identification and mapping work, to avoid a conflict of interest where the same department in charge of harvest activity is also in charge of old forest protection
– Recommendation to include clauses around repercussions for failure to follow the policy, to act as an enforcement measure
– Recommendation to make (an improved) Old Forest document into law, rather than policy

This entry was posted in conservation, natural history, NSWFS Business. Bookmark the permalink.