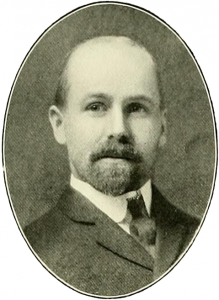 ML Fernald (Wikipedia)
Some of Fernald’s collections are in the Dal Biology Herbarium now being digitized.

View A CENTURY OF SPECIMENS by Stefanie Wilson in Dal News for Aug 7, 2018. Some extracts:

The Herbarium Digitization Project is a collaboration between the Department of Biology and the University Archives. A four-step process, the digitization involves verification, cataloguing, recording included information and then photographing each specimen.

To take these physical records and turn them into digital files is a big job — one that’s perfectly suited to a Biology graduate who has developed a keen interest in plants.

“I originally wanted to go to Medical School, like a lot of starting Science majors,” Nick [Belliveau] admits, “but I ended up really falling in love with the flora of Nova Scotia and Botany and that part of the Biology program.”

Nick received the Sarah Lawson summer research scholarship so he can work on the project full time over the summer. At the end of August, he moves to Saskatoon to start a master’s degree in Plant Systematics.

There are some significant holdings in this herbarium including, apparently, some materials collected by famed American botanist ML Fernald (1873-1950) was “the first person to report extensively on the occurrence of the Atlantic Coastal Plain Floral Element in our province” (cited in Nova Scotia Plants by Marian C. Munro, Ruth E. Newell & Nicholas M. Hill, 2014).

This entry was posted in Flora. Bookmark the permalink.